Currently used in the domestic market, widely used in the packaging cushion, mainly expanded polystyrene (EPS) and foamed polyethylene (EPE), although with good cushioning performance, low cost and simple production process, but Its packaging waste cannot be naturally degraded, and it is difficult to be recycled and processed, resulting in serious white pollution, and at the same time, it faces serious shortage of raw materials and green barriers. Therefore, research and development of environment-friendly buffer packaging materials with good environmental compatibility has become a concern for the packaging industry in the new century.2) The expanded perlite pearls developed by the author: The liners are mainly cheap, easy to obtain, and environmentally friendly. The expanded perlite and environmentally friendly adhesives and other additives, after thorough and uniform mixing, are foamed and shaped in the bonding process. In order to evaluate the slow and medium properties of the expanded perlite liner, it is necessary to carry out the static Compression and creep performance tests.

The static compression test is mainly used to assess the performance of the buffer material under static loading and its ability to protect the contents during circulation. The test was carried out in accordance with the "GB 8168-87 Static Compression Test Method for Cushioning Materials for Packaging". That is, the load was applied to the packing material at a low speed and the compression force deformation curve of the buffer material was obtained. The equipment used in the test is the CMT4103 microcomputer controlled electronic universal testing machine, which is provided by Shenzhen New Sansi Measurement Technology Co., Ltd.

The test mainly tests the stress and strain of the expanded perlite liner. In order to compare with the static compression performance of the existing slow and medium materials, the stress-strain of the honeycomb paperboard, EPE and EPS was also tested. lOOmmxlOOmm, test results shown in Figure 1 and Table 1. 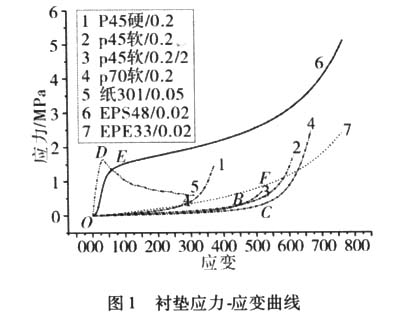 From the curves 1-4 in Figure 1, it can be seen that the static compression curve of the expanded perlite liner can be divided into two parts. The former part (the curve segment before the point A, B, and C) has a large strain change, and the stress change is larger. Small, indicating that the liner is subject to a relatively small force will produce greater deformation, and the curve is almost straight, you can use Hooke's law to describe the law of stress and strain; the latter part (A, B, C points after the curve) The stress change is large, but the strain change is small, which means that when the pad is subjected to a large force, it produces a small amount of deformation, the entire curve shape is similar to the tangent curve; from the second and third curves are close to coincide, indicating that can withstand Repeatedly compressed. It can also be seen from Fig. 1 that the compression curve of the expanded perlite liner is similar to that of the EPE compression curve, and the EPS can be seen from Table 2 and Fig. 2 at the initial stage of the test (before 1 h). , And the rate of change is faster, the rate of change in the later period (after 1h) is relatively slow, and the curve is almost linear. As the static stress increases, the time to reach the creep limit is shorter. For example, the time for the first curve to reach the creep limit is 96 hours, and the time for the second curve to reach the creep limit is 24 hours. The time to reach the creep limit of the curve is 1h; with the increase of the static stress, the maximum creep rate also increases, the maximum creep rate of the first curve is 25.73%, and the maximum creep of the second curve is The rate and the stress-strain rule of the honeycomb paperboard differ greatly, which shows that the static performance of the liner has the same characteristics as the static performance of the EPE. In addition, it can be seen from Table 1 that the residual strain of the expanded perlite liner thickness is slightly larger than that of EPE and much smaller than that of EPS and honeycomb paperboard. This shows that the resiliency of the expanded perlite liner is comparable to that of EPE, which is better than EPS and Honeycomb cardboard is much better.