At 10 o'clock on January 31, 2016, the APPL-9 C double-section small rocket that used 3D printing to make the casing was successfully launched in the Hsinchu coast of Taiwan. The rocket successfully completed the sub-section advancement, flying 1000 meters high, and the last three The parachute successfully landed on the ground in order, laying a solid foundation for research and development, and the National Transportation University's forward-looking rocket research center was greatly excited, and it also gave 8 years of hard work to get the best feedback.

Wei Shizhen, a member of the Forward Rocket Research Center, said that the entire development process from zero to successful launch has been more than 8 years. The first launch of the APPL-0 small rocket is to use a stainless steel drying rack as a launcher, and this time APPL-9 C The rocket was produced for about one month. In April last year, there were also small rockets of the same type. Up to now, the team has launched more than 20 rockets of different sizes in Hsinchu and Pingtung. In addition, APPL-9 has three series. It is a two-stage rocket. It launched the first one in January last year and the second one in April. It was only in January of this year that it finally tested the rocket from the first quarter and the second node fired successfully. The important purpose is to test the system of the big rocket!

The picture on the left shows the first rocket launched by the National Chiao Tung University in June 2008.

The forward-looking rocket research center is composed of a group of professors and graduate students. The APPL-9C two-stage small rocket has a total length of 2.7 meters, a rocket body diameter of 15 centimeters and a weight of 27 kilograms. The main purpose of the launch is to test the mid-year flight. Try the multiple-system of the HTTP-3 large hybrid double-section rocket. 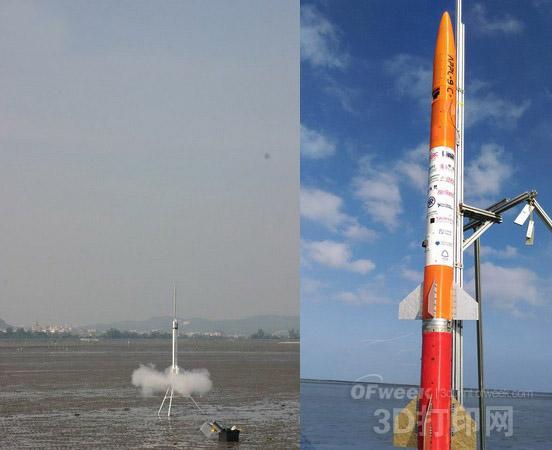 The first section of the APPL-9C two-stage small rocket uses an environmentally friendly and pollution-free solid rocket motor. The second section is the PE-N2O hybrid rocket motor. The outer casing is mainly environmentally friendly. The plastic PLA 3D printing technology is mainly made of glass fiber casing; the recycling system is opened in sequence with three parachutes to reduce the rocket landing speed.

Since the flight altitude is less than 1 km, and the weather is fine, the entire experiment can be clearly seen by the naked eye, and all flight computer data is transmitted smoothly and completely to the ground receiving station during the flight. This success will also determine the main structure of the HTTP-3 rocket, which can be converted to the HTTP-3 large hybrid two-stage rocket. The goal will be to fly to a height of 100 kilometers for space science experiments.

Wei Shizhen said that the team also has a goal of "modularizing" the APPL series rockets. In addition to being used for teaching and rocket launching activities, it can also be used as a test platform for the large rocket system. In addition, in order to solve the funding problem, the team I also raised funds on the Internet and hoped to raise NT$16 million. However, there is still a gap. I hope that there will be financial support to allow the Rockets to continue production.